Magi Journey – Babylonia is now available in Kindle, Kindle Unlimited, Paperback and Hardcover from Amazon. Below are experts from the book.

Magi Journey – Babylonia is now available in Kindle, Kindle Unlimited, Paperback, and Hardcover from Amazon. Below are experts from the book. 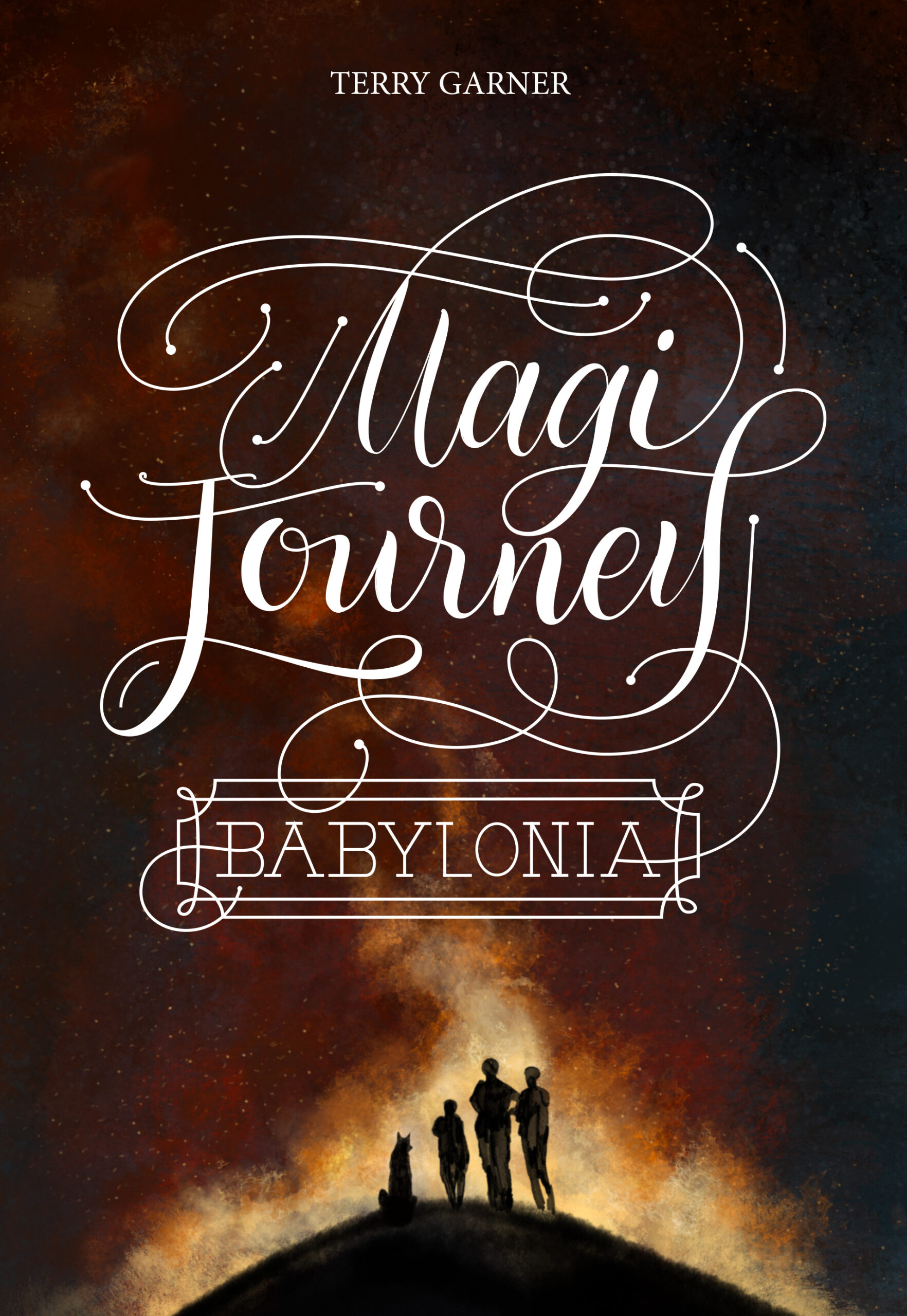 Magi Journey – Babylonia is now complete. The book contains the same Magi Family that is traveling from Persepolis, Persia to Bethlehem, and the perils they face in book two are worse than the threat of the Immortals in Book one. The historical tale the Magi teach their children while on the journey begins in 626 BC and contains the Babylonian conquest and defeat of Assyria, the defeat of Pharaoh Necho II, and the campaigns against Jerusalem. In book two the reader meets Jeremiah, Ezekiel, and Daniel.

Khalil finished eating when he heard the hooves of many
horses running at a gallop. He saw over twenty horsemen with strung bows riding
straight at the camp. His weapons were thirty feet away, leaning against his
tent. He crouched, making himself as small a target as possible. The horsemen
were in the middle of the camp, shooting down his companions with alarming
accuracy. The man standing next to him took an arrow in the center of the chest
and fell into the cooking fire. The horsemen reached the end of the camp and
wheeled in unison, coming back for a second pass. Half of his companions were
already dead, and this was no time for foolish heroics. He turned and ran west
into the desert and saw three other men running with him. He couldn’t see what
was happening in the camp but based on the screams, it wasn’t good. He and the
men with him sprinted for almost two minutes. His lungs and the muscles in his
legs were burning, and he began to slow his pace. Two of the men ran past him.
They were wild-eyed and gasping for breath, but terror drove them on. They ran
for a few more minutes when Khalil heard the sound of approaching hooves. He
steeled himself for the arrow in the back he knew was coming. Instead, the
horseman rode up beside him and hit him in the head with his bow stave,
knocking him off his feet. He looked around groggily and saw his three
companions lying in the sand. Slowly the four men stood and huddled together.
One horseman spoke to them in Persian, which Khalil understood, but the other
men did not. The rider pointed back toward their camp, and the four men began
to walk.

The two men approached the throne and knelt before the king. Nabopolassar allowed them to remain in the supplicant position for an extra minute to remind them he might not be king of Assyria, but he was just as powerful.

“Rise,” the king finally commanded, and Seena and Wardeen stood. “I thought it best we have a little chat. I want to understand your position in Babylon.”

Seena understood the question perfectly, “Great King, you know us. We spent many years together during your training as a young man.”

“Yes, I remember the training well. I still have the scars from your weapons training,” Nabopolassar said as he glared at Seena.

“Scars which served you well, my king. You were a magnificent warrior in our campaign against Elam.”

Nabopolassar leaned back and looked at the ceiling as if he remembered the sights and sounds of the battles, “Yes, I was magnificent, wasn’t I?” he said to no one in particular.

“You were indeed my king. I may have been your trainer, but you led us into battle. As to your original question, our position in Babylon is to serve you. Your father knew the growth of the empire would come from the east, with Babylon at its center. You lead the Medes to the north, the Chaldeans, and the Persians to the west. The responsibility of the Magi is to train the nobles of Babylon and its vassals in the ways of Assyrian culture, administration, and warfare. That is our only purpose, Great King.”

“Yes, I understand your primary directive, but what is your secondary objective.”

“We have no secondary objective, my king. We are simple teachers, and we are here to serve the kingdom’s needs.”

Nabopolassar’s face reddened, and his eyes narrowed, “You know exactly what I mean. Are you here to serve King Sin-sharra-ishkun’s needs or my needs? In the future, those two needs may appear to be different in your eyes.”

Seena knew now was the time for a very carefully worded response. He composed himself, “My King, the Magi serve the Assyrian empire, Sin-sharra-ishkun is the king of that empire. The Magi believe that a strong Babylon is good for the empire, and we are committed to you as you strengthen Babylon and its alliances. We are here as teachers and trainers only. We now have schools in Nineveh and Babylon, and those schools serve the same function, service to the empire. We are not here to make policy or to intercede in the political decisions of you and Sin-sharra-ishkun. Specifically, I am here to serve you and the empire. Whatever decisions you make and alliances your form, the Magi will support. If you feel the need to communicate that information to Nineveh, that is your decision. The Magi are not ambassadors. We are not responsible for reporting the actions of the King of Babylon to Nineveh.”

“Excellent, Seena. You will see various leaders from the Medes and Chaldeans coming and going. You will see a combined army gather for ‘training purposes,’ all these things are the business of Babylon, and the information remains in Babylon. Am I clear?”

Natan was not ready to be alone, so he wandered the streets. He bought food from street vendors, went to shops, and talked to merchants. He wanted to get a sense of the mood of the people. Everyone he met was optimistic and confident. They were certain the Babylonians had fled from the oncoming Egyptian army. Natan did not offer an opinion. He listened. The more people he talked to, the more depressed he became. No one spoke of the prophecies of Jeremiah. No one believed God would judge Judah for their rebellion against Him. They had hardened their hearts. They had no idea the horror that was coming. Natan walked back to Kadri’s home, head down, lost in thought.

The young couple sat, and Fardad bowed his head in prayer, thanking God for the day, the food, and God’s miraculous care for the Family. Finished, he looked at Sasan, “Well, let’s begin with your story. What happened in Susa?”

Sasan had been the Grand Counselor to Queen Musa of Persia at the court in Susa. Sasan frowned, and his eyes drooped. He looked at his father and began, “It is not a story I am proud of, father. Leyla, Navid’s ex-betrothed, came to my office three weeks ago, having ridden four hundred miles from her family’s compound to Susa through the mountains in the middle of winter. She told me Navid had appeared in her bed-chamber in the middle of the night telling her a wild story that the Magi Family was traveling to Israel to find the Messiah. Leyla was furious. Her only objective was to see Navid punished for hitting her and knocking her out.” Sasan looked at Navid, who had hung his head, and his face flushed. “I saw it as an opportunity to gain control of the family. I took Leyla to see the Queen and told her the story. I recommended exiling all of you from Persia and asked the Queen to return the Family to Susa, where I would lead and guide them. That’s where everything went wrong. The Queen was furious. She ordered me to execute all of you and return the family to Susa. Leyla’s reward for her service was to become the Queen’s lady in waiting for the rest of her life. The Queen ordered Leyla and me to accompany the Immortals, whom you encountered six days ago, and you know the rest.”

Fardad frowned, “Where is Leyla? She wasn’t with the Immortals?”

Sasan smiled, “She and one of her father’s riders, Meesha, who had accompanied her from Susa, escaped the night before we found you. Apparently, a virginal life as the Queen’s lady in waiting wasn’t her greatest life’s desire. I’m sure she is back at her father’s compound by now. And what of your journey, father, what has happened?”

“Seventy days ago, we saw the Messiah’s star in the west, somewhere over Israel. The night we saw the star, an angel of the Lord visited me and told me that we should find the Messiah and worship Him. That was all he told me. The Council met and decided the Family would make the journey together. Everything has gone fairly smoothly since then. We fought our way through the Persian Gate, when the Uxians decided to rob us, Navid had his encounter with Leyla, we crossed the Euphrates, Tiz fought a crocodile, I exiled three families who had tried to sabotage the trip, Navid fought slavers in the desert and rescued Nura, Utana broke his arm fighting a lion, Navid and Fahnik married, Ava and Utana, and then God saved us from the Immortals when Pari prayed. A fairly calm trip so far.”

Natan was not ready to be alone, so he wandered the streets. He bought food from street vendors, went to shops, and talked to merchants. He wanted to get a sense of the mood of the people. Everyone he met was optimistic and confident. They were certain the Babylonians had fled from the oncoming Egyptian army. Natan did not offer an opinion. He listened. The more people he talked to, the more depressed he became. No one spoke of the prophecies of Jeremiah. No one believed God would judge Judah for their rebellion against Him. They had hardened their hearts. They had no idea the horror that was coming. Natan walked back to Kadri’s home, head down, lost in thought.

After almost twenty months of the siege, Natan heard a strange sound. He paused in the street, listening carefully. His mind, confused by hunger, was slow and disjointed. He pounded his temples in frustration. What was it? What was wrong? THERE WAS NO SOUND. The siege engines had stopped. Natan was listening to the sound of silence for the first time in twenty months. They were coming.

Pari raised her prayers to God. The Magi barely recognized her voice. The timbre was deeper and louder than normal. Eyes closed and hands raised, she petitioned God. “The God of all creation, we praise Your Holy name. The Great I Am, Jehovah God, we call on you and beseech you. As the breath of Your mouth parted the waters of the Red Sea and the waters of the Jordan River, so too, this day may Your mighty breath stir the sands of the desert. May you lift the sands to the heights of heaven to confuse and destroy our enemy, and may the Magi pass through the wind and the storm unharmed.” Pari’s voice increased in volume. The Magi could feel her voice in their innermost being, not just hear her. Every eye opened and stared in wonder at this woman God had chosen to use in mighty ways. “Smite these men that would enslave people. Men whose greed, avarice, and pride you hate. Fill the Magi with Your power and might and bring judgment on them.” Pari’s verbal prayer ended, but she sat for several minutes more, praying and listening to God. Pari opened her eyes, smiled at the Magi, looked west, and pointed. Every eye turned to follow her hand. Visible in the west was the largest storm anyone had ever seen, but there were no clouds in the sky. No lighting. Just a solid wall of sand as high as the eye could see.